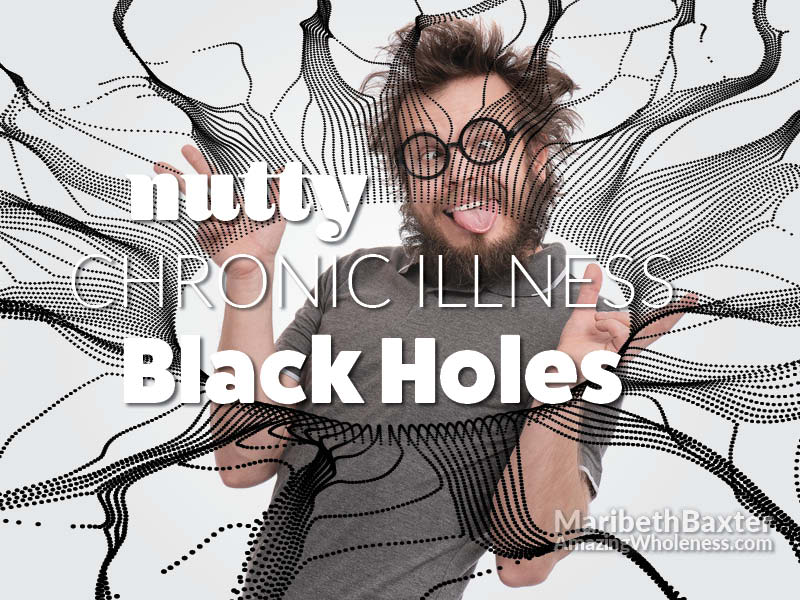 Recently I wrote a post about Black Holes of Chronic Illness and many of you responded. So we are going to keep talking about ways out of those nutty black holes.

Often we don’t perceive that there is any way out of the darkness of chronic illness. The facts in front of us are overwhelming. The obstacles are impossible. And the black hole has sucked us in. I get it!!

What if we could alter that reality? No, not by going to Lala L hiding under the covers.

Digging into something different can transport us to a new understanding and open up the possibilities.

Maybe just a new perspective. Maybe just laughing at how nutty our thinking gets at times during illness!!

Albert Einstein is one of my favorite people because of his genius mind that included imagination, cleverness, humor and endless possibilities. Just being smart does nothing for me. But Albert… oh how amazing his mind saw things. He got farther out-of-the-box than my imagination could ever take me.

To get out of black holes, we need the imagination of the ablity to overcome the reality in which we live during chronic illness.

Imagination helps us see the even when they seem imposible.

Not only was Albert Einstein a brilliant scientist, but he also had to deal with the reality of his time. He was caught in a bad situation (black hole) during World War II being part of a Jewish family. Granted, his position as a brilliant physicist provided an escape that most others did not have. Escaping to America and becoming a citizen in 1940, he continued his work and continued to use his mind in ways far greater than most of us.

Einstein had to be able to imagine a future life, regardless of circumstances created by Hitler — otherwise he would not have stepped onto the boat for America.

Although he was incredible, he also was just a human being. We have minds too. Okay, not as grand as Albert’s but we have our own special grandness for our lives.

Think BIG, use your limitless imagination, to get outside of the black holes that most likely will come during chronic illness.

Albert Einstein saw the world through a different set of eyes than most people do. His mind not only wrapped around physics, but he certainly had an incredible imagination to be able to discover things like special relativity.

I am a big fan of quantum physics. My brain does not wrap around the enormity of it but it does enjoy the basic concepts.

And what does quantum physics have to do with black holes, hang on….

Quantum Physics = Scientific proof that… We have more control over our lives than we realize. We can use our minds to expect different results and they will actually happen and that is proven by the science of quantum physics. We have the ability to choose what we think and when we perceive the possibilities, they are endless. Using science, it has been proven that the “energy” (we have through thought) can change an outcome. As wild as it seems, we can even generate different outcomes on the other side of the planet through our thoughts and expectations. One can even squeeze in the concept that there is a higher power that we can tap into to gain more intentional, more purposeful, thinking.

I know, sounds a bit quirky but I have God and science on my side AND Albert Einstein!!!

science without religion is lame, religion without science is blind

Einstein is the one who came up with the Theory of Relativity. Even he had moments that he thought he could be wrong. Part of his exploration in this can be found in black holes.

FINALLY, back to black holes.

Recently I watched this about Einstein and the Theory of Relativity (black hole conversation starts rough). The insight into black holes helped me visualize them differently. Sometimes getting lost inside a black hole helps us see the reality of black holes which helps us move out of black holes. WHEW, I know, bit out there.

The black holes of chronic illness are awful, scary, dark places to be. It is a very difficult road to re-route our brains to think differently. What we see are the difficulties of illness, the endless obstacles and the loss, heartache and suffering. Those are real, no getting around that fact.

Yet, it is in our perception of what is possible that will create a different outcome.

Our brains and emotions all work very differently. For me, it was helpful to get absorbed into black holes with Einstein and the Theory of Relativity. Nope, didn’t begin to understand all of the science. But there were some concepts that helped me see a different picture of our universe and move out of one of my recent black holes.

I just might even be starting to have some fun with the black holes of illness — because I am learning tools to avoid them, or pull me out if I get sucked into one. The more effective I get at this, the calmer I am, the more accepting I am and my healing is increased!!

There’s no doubt that the theory of relativity launched Albert Einstein to international stardom, yet few people know that it didn’t get indisputable recognition until the 1970’s. Now, over 100 years beyond its first international publication, this film profiles scientists who are using the theory to conduct a new generation of experiments that shape our ideas about the nature of time and space.

~ Amazon | Movie, Einstein and the Theory of Relativity