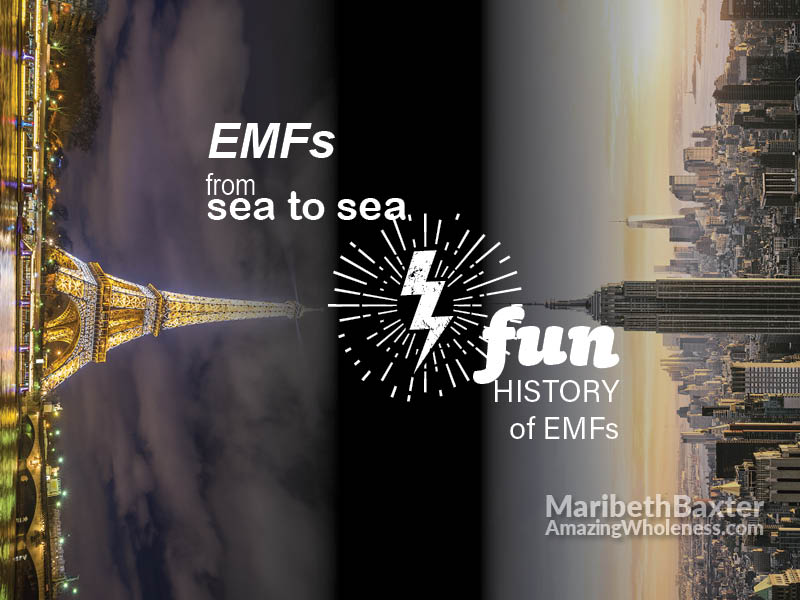 Can we tie EMF’s all the way the late 1800s? Was there a plan for free worldwide electricity? Who invented the wireless? Did spies from America, Britain, Russia, and possibly Germany all get involved in a well hidden EMF history? Can the New Yorker Hotel house the greatest EMF source of all time? Setting all conspiracy theories aside, there is some interesting EMF history that bends the mind. This is a fun one that can enlighten your EMF knowledge bank. Find out who and what gave us over 80% of our technology today with EMF’s.

We don’t have to get caught up in the political wars about EMF’s that can cause great stress while we are trying to overcome illness.

During chronic illness, we have to choose our battles. Fighting EMF dangers single-handedly most likely will not be a battle to take on. We can be upset about 5G and all EMF exposures that are lurking, which diminish our health. Or we can do our best and let the rest go

Though free to think and act, we are held together, like the stars in the firmament, with ties inseparable. These ties cannot be seen, but we can feel them.

The man who may have discovered EMFs is the man who says, “these ties cannot be seen, but we can feel them.” Certainly back in the late and early 1900s he did not exactly know what was going to happen to our health from EMF’s.

Have fun with understanding more about EMF’s, the fun way – the mad scientist way…

Why can’t we just have some fun with learning about EMF history? Keep it light, keep it fun, keep it factual and accurate.

Supposedly, Albert Einstein has been quoted saying, Nikola Tesla was far smarter than himself (Albert Einstein). Who is this Tesla mad scientist?

The History Channel came out with an incredible mini-series about Nikola Tesla that was a pure adventure to watch. Better than a documentary, more entertaining. Better than a Hollywood movie which loses elements of facts and accuracy. This show had me at the edge of my seat during every episode, because of the truth and fun in it.

If you are in bed chronically ill, you might as well spend your time being entertained by learning something really cool.

It was made in 2018 so the photography and graphics were on a grand scale.

If the History Channel did not make this, I might not have watched it. The Tesla Files is one of the very best programs I have watched in a long time. It was a mind-bender, really fun, and made me realize EMF’s have been around longer than I ever realized.

Fun To Use Our Brains

Use it or lose it!! Using our brains, stretching them through unusual sources can build neurons and is a great Alzheimer’s prevention tool. When you find something that catches your attention, run with it. It is good for your brain health.

It is good for you in general. Chronic illness can get quite boring and monotonous. Find ways around it, dig into subjects that interest you. These goofy trails are actually good for us, sick or not.

Don’t like my rabbit trail, pick one of your own! Have fun while you are exercising your brain using YOUR interests!!!

If Tesla captured your attention like he did mine, explore him further.