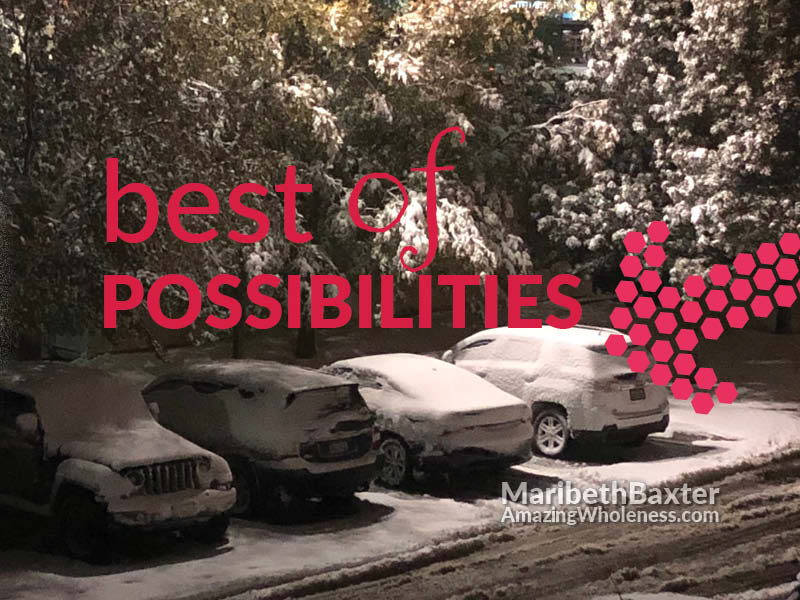 We sure can get stuck in the yuck-and-muck of chronic illness. There are endless difficult situations that quickly become overwhelming when we are chroncially ill. Recently I learned another brain trick that can instantly calm the stress of illness. Training our brains to find the possibilities in impossible situations.

On a recent road trip, I listened to an audiobook about training our brains. Dr. Caroline Leaf (neuroscientist teaching neuroplasticity) explained that we can take impossible situations and flip them to something positive by focusing on possilbilities. Doing that flip relieves stress and retrains the brain to make connections that will improve our overall health.

This is how it looks;

Ohhhh yikes, a hard sudden early winter storm shut down the Interstate on my road trip.

You get the idea. Something wild hits us during chronic illness and it can easily spiral into disaster.

What was suggested was taking a deep breath and exploring the possibilities, not the impossibilities.

You get it, FLIP IT

Take the impossible and flip it to the list of possibilities the situation presents.

This was a perfect opportunity for me to practice what I had learned. It worked like a charm.

It worked so well that I clearly understood the Can-Do-Possibilites and ran with it.

See, we can do this. Life comes with nonstop difficult situations. When we are chronically ill, those situations feel more intense and we have a more difficult time sorting through possibilities. We tend to crash because we have brain fog from illness, we have no energy to deal with the emotional stressors of crisis and we tend to shut down instead of processing possibilities.

It takes practice. I actually remember practicing this concept when I was still desperately ill. It was harder back then but all that practice sure did make for an easier time today when I needed to work through the quickly and safely.

AMARILLO, Texas (CBSDFW.COM) – Heavy snow fell in Amarillo on Thursday, with what the National Weather Service in Amarillo described as “near whiteout conditions” shortly before 1:00 p.m.

That does not begin to represent what really happened.

The roads were not even close to being that clear.

There were crashed cars in the median and the sides. People were grabbing luggage and abandoning their vehicles to get to safety.

There were emergency vehicles galore. I even saw an ambulance without lights or siren, assuming they knew they would be called soon.

Snow plows were out and in full force. I slid in behind one for a while which made it easier for me, with no chains or 4-wheel-drive.

Sand trucks were doing what they could to help drivers over the bridges.

The traffic was heavy. Bad for how many were in it. Good for creating ruts in the snow and ice so we could inch our way through it.

The wind was heavy. I heard one radio weather report say 35-miles-an-hour and another say 40. Neither sounds like much but while driving on icy roads with that much traffic, the wind was sliding the high profile vehicles all over the place.

The visibility was so low that I had trouble seeing the upcoming road signs. There was one time I could only see ONE car in front of me because it was so thick.

It easily could have been disastrous for many more people.

I had my liquid minerals in hand in case my heart decided to do its “I am stressed and I am going to show you who is in charge.” I have had heart failure enough times to know not to mess with it so I was prepared.

I still have some Babesia (cousin to malaria) so it makes me VERY hot then I get the chills. My windshield was freezing so I had to blast the heater with the defroster and I could not take the heat without getting dizzy. I had to unroll a back window to keep me cool and at the same time keep the windshield warm enough to allow the windshield wipers to keep working. THAT made me giggle so I was happy while trouble-shooting my possibilities!!!

While I sit here in my warm dry hotel room, I am very aware that the hotel quickly filled up and many had trouble finding shelter for the night. My flipping to the possibilities got me off the road more quickly than many others.

There are SO many difficult and almost disastrous situations during chronic illness. I like the idea of using our brains to reframe the situation so that we can see the possibilities and act on them accordingly.

Use your brain. Retrain your brain to help you, not hurt you.