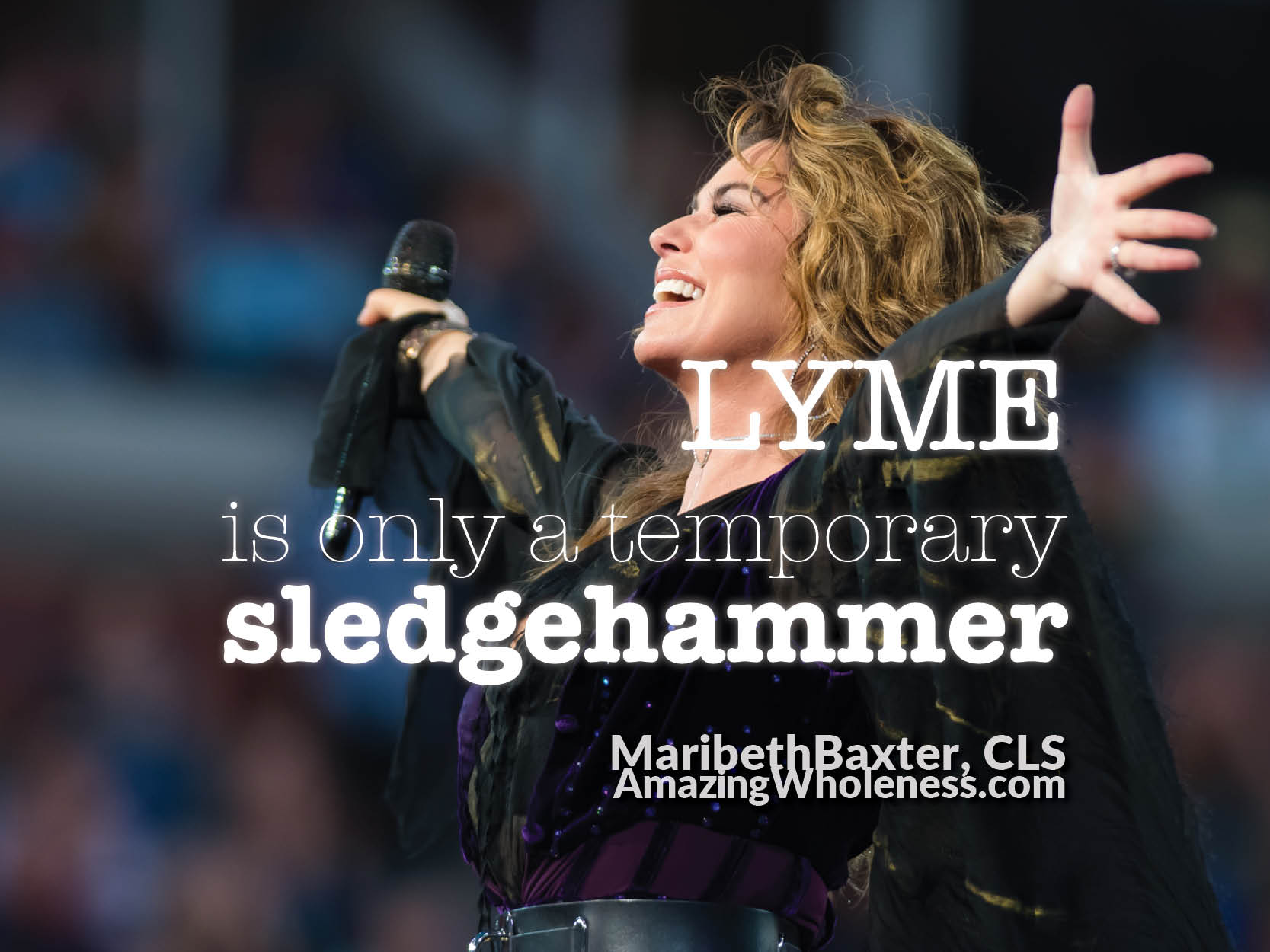 Lyme is only a temporary sledgehammer. Shania Twain found her way back up from Lyme, and so can you. She never said it was easy. She never said that it was not life-changing. Anyone who has had Lyme knows the struggle. Those of us who have risen above Lyme also know the personal victories.

I just heard that Shania Twain had Lyme disease around 2004. As she told her own story in Shania Twain: Not Just a Girl I was shocked to hear that she had contracted Lyme. The story barely touches on Lyme and how it affected her vocal cords and some neurological issues. It was like she was explaining a side note, not a sledgehammer that temporarily took her down.

The story reminded me of what it is like to rise above Lyme, get past it, and move on with life as a transforming power. Those of us who have moved through the experience of Lyme can identify with the other side of that sledgehammer. It usually knocks us down, teaches humility, reminds us of our mortality, brings us to our knees, and allows us to come out the other side with great personal power.

As with all Lyme warriors, she had many personal struggles and had to learn how to get back up after every blow. Lyme was only one blow. Divorce was around the same time as the tick bite. Stress!!! Lyme feeds off of stress. Stress allows Lyme to be a sledgehammer inside of the body.

The voice of Shania Twain was transformed. Lyme touched her vocal cords. She sounds different now. She sounds stronger, with a force behind her to remind all of us not to allow anything to break us.

She is a perfect example of the power of voice. There were years that she lost her voice, she was quiet, she was not singing. For those of us who cannot sing worth a flip, we can still identify with losing our voice from Lyme. It usually just plum knocks the wind out of us for a time. But just like Shania Twain, we can come back with a stronger voice.

At this point, I have watched hundreds of people walk through Lyme disease. Every last one has found more of their voice through the experience.

I often wonder if Lyme is just simply a personal challenge to see how high we can rise above it. Those who learn how to tackle the physical challenge of Lyme can rise above it on a physical level. Those who see it as a personal challenge to grow and become more of who they were meant to be, shine brightly. Shania Twain was one of the brightest music stars ever. Lyme was just a tool to make her voice even more beautiful and heard more powerfully.

We all have it inside of us. It is a choice. A very personal choice to discover the power we have inside of us to rise high above Lyme and other destructive forces.

Be encouraged by Shania Twain’s story…